Well, how apt that a man known as Chips should be a sushi making expert! You can insert your own jokes! It provided us with much hilarity. However, name aside, Chips is not a professional sushi maker but has taught himself for the past 7 years. His main research has been in the form of eating, something many of us can relate to. After a brief introduction Chips got stuck into the sushi making demonstration. He showed us how to make rolls with seaweed either inside or out and balls of rice with toppings. 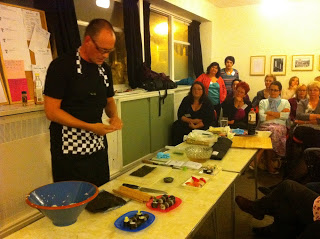 The blue bowl contains specific sushi rice which is cooked for 15 minutes until still slightly firm then seasoned with a couple of tablespoons of rice wine vinegar, some sugar and some salt.

Chips started with making maki. The seaweed is bought in sheets, half a sheet used each time. The seaweed is placed glossy side down on a bamboo rolling mat. With wet hands to combat the stickiness of the rice Chips placed 2 palmfuls of rice onto the seaweed and pressed it to cover 4/5 of the surface. He advised adding wasabi to personal taste and then lined chopstick sized pieces of cucumber on the rice about a quarter of the way down the sheet. 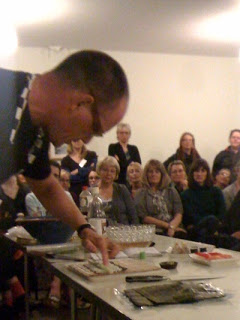 Then comes the tricky bit, rolling the sushi, which Chips made look easy. Holding the mat he used his fingers as a guide to help the front edge of the seaweed sheet tuck in. With a clever knife trick, to cover the blade in water to stop the rice sticking, Chips sliced along the roll. He suggested using colourful ingredients, mainly to impress guests, such as asparagus and avocado.

Next Chips made inside out or California rolls. He spread 2 palmfuls of rice across the surface of a seaweed sheet and sprinkled it with sesame seeds. He then picked it up and turned it over and added ingredients to the seaweed side. These included wasabi, cucumber, avocado, fish sticks and good old mayonnaise! This was then rolled, boldly, by wet hands and then covered with clingfilm. Chips used the mat to shape the rice and then cut through the clingfilm to produce slices.

The final demonstration was on making nigiri. Chips used roasted red pepper chopped into segments and smoked salmon. Chips held the pepper in one hand and used the other, wet, to squeeze a palmful of rice into shape. he dabbed wasabi on the pepper then gently introduced the rice to the pepper. He turned it over so the pepper sat atop the rice and used his fingers to squish it into the correct shape. 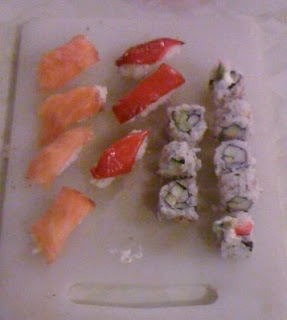 Chips then took questions and made some suggestions such as miso soup for a starter, pickled ginger as a palate cleanser between courses and to use a delicate light soy sauce for dipping. He suggested ordering omlette roll first in a restaurant as it has a mild flavour it allows you to taste the house rice and judge the quality before moving on to other dishes. Chips also reminded us to get sushi grade raw fish so that it would be as fresh as possible and reduce the risk of poisoning! 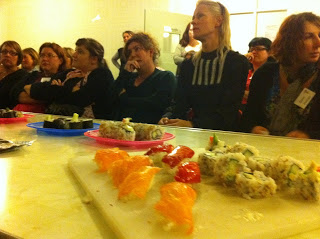 Then the tasting began! There was a mild mannered stampede and everyone was really impressed with the taste of the sushi.
Written and posted by Kate-Em
Advertisement