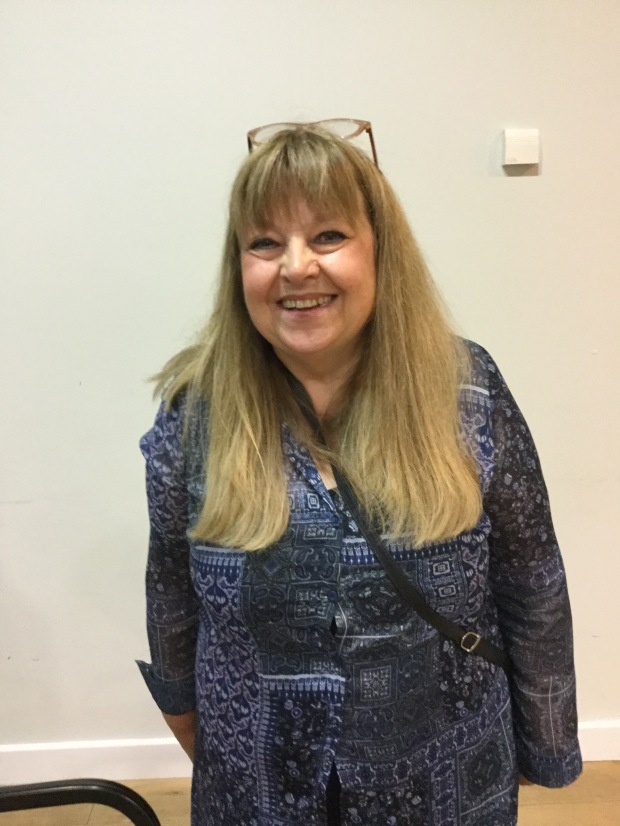 Maria Glot gave us a fantastic talk about Sir Titus Salt. She has studied him for more than 40 years.  We were all issued with bookmarks bearing the names and addresses of people who lived in the village of Saltaire and worked for Sir Titus. Maria had researched who had lived in the houses, found out about the people and their families, and made the characters come to life by telling their stories  Maria was Ellin Dooley on her visit to Hebden Bridge WI

Sir Titus was born in Morley in 1803  He worked initially in his father’s wool business but developed a number of new processes over the years which led to wool that previously wasn’t used to be turned into cloth.   This included alpaca wool which was turned into cloth and then used to make clothes for Queen Victoria.

Over 100,000 people from the Bradford workhouses worked for him but when poor conditions and poor water supplies led to illness and disease, Sir Titus, who was Mayor of Bradford, began to change things.  He moved from Bradford and bought the site at Saltaire.  There was a clean water supply, a railway and a canal.  He built a railway station and with the railway and canal developed transport links. He then built his mill which opened in 1853, and later houses, schools, churches, shops, parks and a hospital.  He named the streets after his wife, children and family members.

Though he is considered to be a philanthropist, the changes he made were primarily to keep his business going.  He made sure the houses and his workers were clean and put in many systems to stop pollution, and recycled and sold the waste from the factories!  Maria amazed us with information about him and his cleverness.  He developed drainage systems, fireproofed his factory, recycled the water used to supply the houses and even put the urine from the factory toilets to use for dying of cloth and leather!

Maria was also able to tell us about the restoration work that has been done in Saltaire to try and return it to the state it used to be in.  Her talk was fascinating and as a result, we are thinking of having a group visit to Saltaire to go on one on Maria’s walking tours.

It was a fabulous evening!

Miriam is one of our members and came to give us a talk with slides, about her experience of walking the Camino de Santiago.  She described her journey in four words -WALK, EAT, SLEEP, REPEAT!

It was a fantastic talk.  Miriam explained the history of the Camino which was first walked by pilgrims in 821.  She explained that there were a number of Caminos which all finished in Santiago de Compostela, where the bones of Saint James are buried in the cathedral.  Miriam walked the Camino Frances which started in France and took her across the Pyrenees into Spain and across the north of Spain to Santiago de Compostela.  This is the most popular Camino and is 800 kilometres in length.

She did a lot of research prior to starting her 6 week walk.  She took advise relating to the rucksack she needed and how it should be worn, and most importantly, broke in her walking boots in advance of the journey.  She did a lot of training! She showed us the things she carried on her journey and explained the three stages of the journey which she described as- the physical stage, the mental stage and the spiritual stage.

She explained, with the aid of her photographs the places where she stayed en route, her footcare regime each day and the rituals that are done along the way.  She also told us of the many people she met and showed us her camino passport full of stamps collected along the route.

It was a lovely evening which ended with some Spanish Tapas type food.

Steve Morgan was born in Hull and studied zoology at Leeds University, but his interest in photography led him to become a feeelance photographer.

He started working with Greenpeace in Vancouver in 1971 and with a group of journalists reported on his first protest which took place in Alaska, against nuclear explosions taking place there at the time.

His talk was set against some wonderful photographs taken all over the world.  He told us about the Greenpeace issues that he was photographing, and they mostly related to environmental issues, energy and pollution.

During his career he had many lucky escapes and brushes with both the KGB and FBI.

The AGM was not all business!  We started off the proceedings with a game – What’s in your handbag  We each were given a list of items which scored points, and the person with the most points won the prize  the listed items included the basics such as lipsticks and train tickets but also had items such as Swiss Army knives!

We had a very interesting talk entitled ‘100 years of WI’ given by Gill Brown.  It was full of interesting facts and photographs telling us the history of the WI.  Gill informed us about the most influential women, why the WI started and how it had had a big revival in recent years.

She told us about how the groups differ to suit the community of women that attend and informed us that there are WI groups in some prisons.  However the groups differ , the focus of each group is around having fun, meeting people, gaining new skills and new experiences.

The evening ended with new members being voted onto our committee and the usual beverages and cake.

For our February meeting we welcomed Jill Liddington, Honorary Research Fellow of the University of Leeds and Fellow of the Royal Historical Society to speak. 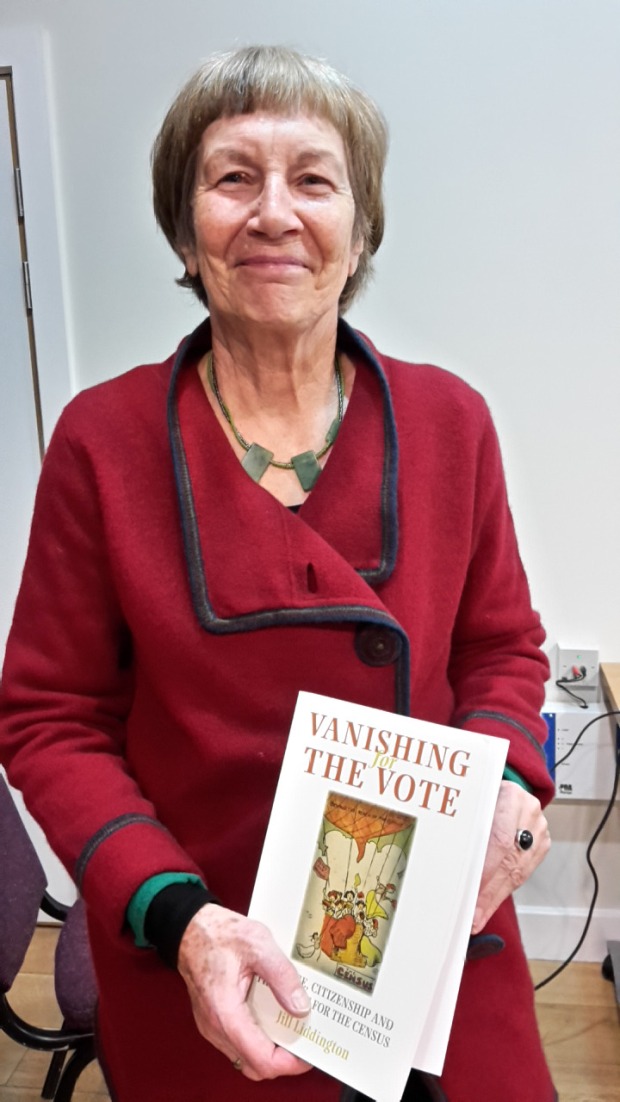 Surprisingly, as a historian of Women’s history, this was Jill’s first talk to a WI group. She focused on the 1911 census which was boycotted by many women as a protest against the lack of female suffrage. In fact the suffragette’s slogan for 1911 was ‘No Vote-No Census’.

Jill took us beyond the slogan to put the census of 1911 in the context of the Liberal government’s social reform agenda and by looking at where the suffragettes were, by this year, in their fight for equality. To our delight she did this by taking a local perspective, largely following the trajectory of four suffragettes: Halifax’s Mary Taylor, Dinah Connelly, Laura Wilson and Hebden Bridge’s Lavena Saltonstall (a room at the town hall is named in her honour). Two of these women evaded the census of 1911 by ‘disappearing’ that evening while two complied with the census.

By examining the political and social reform ideas at the time and the personal histories of the individual women Jill has been able to make a calculated guess as to why women tired and brutalised by prison and campaigning might comply with a government order, fill in the census and avoid the £5 fine. She explained both what the women who evaded the census achieved and what the government did (or in this case) didn’t do afterwards.

Jill also put the eventual suffragette achievement in its wider world context of the First World War and Bolshevik Revolution. The talk was illustrated with historical documents which both informed Jill’s debate and bought these West Yorkshire women and their hand-made banners to life.

The evening finished with a lively Q & A and of course WI cake and tea.

For those wishing to continue learning more about local suffragettes, see Jill’s website.

In 1906, the nation’s eyes were trained on Huddersfield. Emmeline Pankhurst swept into town and addressed massive crowds. Join historian Jill Liddington to walk in the footsteps of local suffragettes. Jill’s latest book, Vanishing for the Vote, tells the story of the suffragette boycott of the 1911 census.
Charge: £3; no booking required.
Walk: lasts 1½ ~ 2 hours.

We rarely invite formal speakers at Hebden Bridge WI but the evening was proved to be a great success with the high attendance, visitors from afar and following lively debate. Thank you to all those who made the evening a success.